Poodles Come In Many Colors

Not only do Poodles come in three sizes, they come in a rainbow of colors. Blue, gray, silver, brown, cafe-au-lait, silver beige,apricot, and cream, with black and white being the most common. The coat may show varying shades of the same color. Refer to the AKC website below for a detailed discussion of  color or click on the following link to get further information on poodle color.  REMEMBER TO CLICK THE BACK BUTTON TO RETURN TO THIS SITE!

Brown and cafe-au-lait Poodles have liver-colored noses, eye-rims and lips, dark toenails and dark amber eyes.The distinction between cafe-au-lait and silver beige has been a tough one for me to make. After researching other breeders definitions and examples, I can only conclude that some dogs are being labeled silver beige which are probably, in actuality, a parti. With the help of AKC, I offer the following definition. A cafe-au-lait color looks the color of coffee that is blended with half cream, a pale light brown. The silver beige is a kind of khaki color with overtones of silver. I have seen pale silver colored poodles with brown ears that have been mistakenly called "silver" "beige".I believe that the true silver beige is the same color, both body and ears, with the ears being, perhaps, up to a shade or two darker.

The word "sable" means that the end of hair is tipped in black.A sable colored puppy appears to be dark in color, due to the black tipping of the fur,  but if you check the under coat you can see that the pup is indeed a much lighter color. As the puppy ages and the fur grows, the coat will become very light (sometimes nearly white). The ears will usually retain the dark color that defined the entire coat as a puppy. There are apricot sables, cream sables, etc. Some examples of sable colored puppies can be found below:

See http://www.cindyspoodles.com for some excellent, additional examples of coat color. Her site is one of the most extensive and informative that I have come across. Her poodles have been bred with obvious concern for maintaining strict adherance to breed standards while sucessfully breeding down in size to the teacup. A++

Another color that you hear breeders using is "brindled" color pup. By definition, brindling is a kind of "stripe" ing of color, more easily discerned in short haired dogs like the Great Dane. My guess is that some of these dogs identified as brindle may be sable colored instead.. A long haired dog with brindling will probably present as a mixture of several colors in the fur. A shaving of the fur would reveal a true brindling at the skin level.

Most Poodles are not the same color at birth as they are at maturity. Sometimes it takes a year for the color to clear.Silvers are born black. Cafe-au-lait and Silver Beige may appear as a dark brown chocolate for weeks after their birth.Reds darken and Apricots lighten with age. If you are truely particular about a certain color, it may be best to consider an older puppy.

There appears to be a great deal of confusion among breeders when it comes to identifying reds, apricots and creams. One mans red, is another man's apricot, so to speak. Birth color is not necessarily a good indicator of adult color. A true red will usually darken, an apricot usually lightens and a  cream should have no hint of the reddish color shared by the other two, but instead should have a tannish cast. An apricot or cream may appear to be white as an adult, but a true white will have no shading of any other color in the ears. It will be just that, an icy white throughout. If the dog had color as a pup, it is not a true white, even if it seems to have "outgrown" those colored shadings. Below is a most helpful swatch of colors to help clear up the mystery of reds. Parti in French means consisting of two or more colors, commonly black and white. This can vary from a small amount of white on a dark dog to a fairly even ratio of light to dark. Parti's have irregular-shaped pattern of spots.Cream and white parti colored dogs are often mistaken as white. An excellent reference on Parti-colored poodles is http://www.homestead.com/sharminspoodles/PartiFacts.html    or http://partipoodle.homestead.com

Coloring should be a nice clear white background with dark patches of any color. While any type of markings are acceptable including a solid colored head, the preferred pattern is dark patches over both eyes and on both ears. Muzzle should be white with a blaze up the forehead continuing into the topnot. Spots or patches may be anywhere on the body but should be broken up and not solid enough to form a saddle on the back. FAULTS: While a small amount of freckling (very tiny freckles in the white part of the coat) is acceptable (especially on the feet) excessive freckling is considered a major fault! A Full saddle on the back is acceptable but undesireable.

The tuxedo marked coat is the black coat with the white chest and, sometimes, white paws. Most believe this to be a mismarked dog, while others make no distinctions between this marking and the parti colored markings (calling them both mismarks). Tuxedo and parti can both appear in the same litter, leading to speculation that they are caused by the same gene.

A Phantom is a Poodle of any color with the tan point pattern. This is the marking that appears in all of the known tan marked breeds- such as Dobermans, Dachshunds, and Yorkshire Terriers.For an example of the Phantom markings, see puppy below: 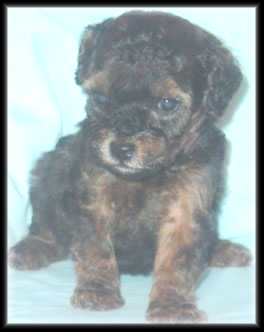 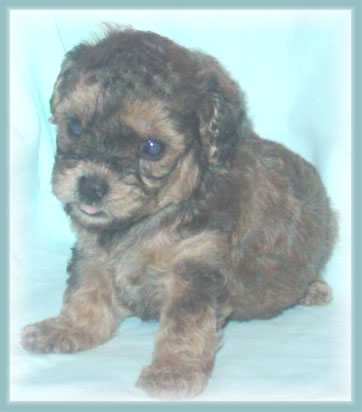 There shall be a spot of a different color- normally tan - in the following places:

A Poodle has a downy undercoat. Its topcoat should consist either of wiry, coiled hair, or long, smooth hair that hangs in cords. Poodles can be almost any solid color.

Both styles dictate that each leg is cut, leaving only a ring of hair near the foot. In both styles, the hair of the face and tail are also cut. A pom-pom of hair at the end of the tail or top of the head may be left. In the Continental style, the hindquarters of the dog are shaved down to the skin. Decorations of hair are usually left on the hips and hocks. In the English saddle style, the hair of the hindquarters is cut to leave a cover of short hair.